Iconic Massachusetts brand Saucony boasts a rich heritage stretching back to roots in 19th century Pennsylvania on the banks of the Saucony Creek.  Having already carved itself out as a leader in sports footwear, the brand reached its golden age in the ‘80s and ‘90s with the creation of many of its iconic sneaker silhouettes. After a short lull, the brand has undergone a speedy resurgence in recent years which has propelled Saucony once more to be recognised as an innovative trend setter in the footwear industry.

Central to Saucony’s renaissance is the brand’s fidelity to its shoe range. While new in essence, the Saucony Originals collection rides a wave of ‘80s and ‘90s nostalgia with re-launches of many of the brand’s most-famous and most-loved models in exciting new materials and colourways.  All signed off with Saucony’s instantly recognisable three-dot logo, each silhouette in the series marks an important historical moment for the brand, from the early Jazz Original right through to the Grid 9000 of the mid ‘90s. Although the differences between each shoe might appear slight to the casual observer, they are nuanced and intricate for the seasoned sneakerhead, symbolising a distinct era and style. Choose your Saucony style carefully to make your statement and Instagram or tweet us your look. 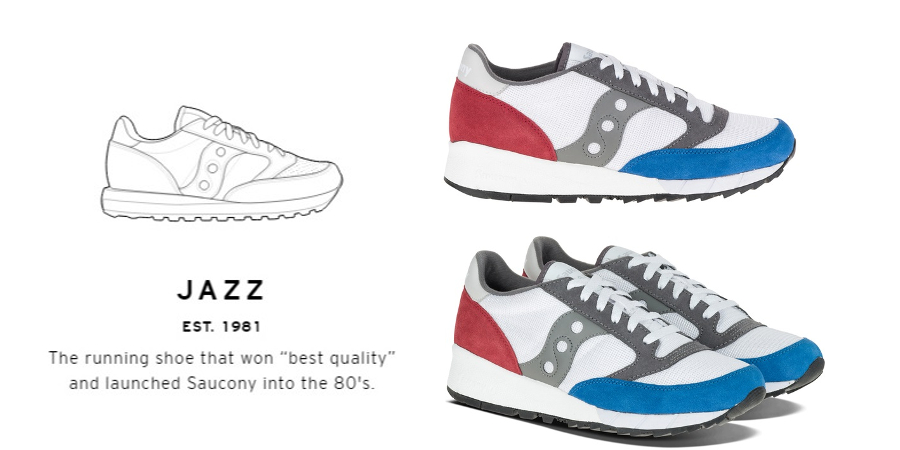 The creation of the Jazz trainer saw Saucony return directly to its ambition of producing the finest running footwear in the world. The brand worked with leading podiatrist Frank Santopietro to offer a design that focuses on reducing weight and achieving greater balance; this was achieved with several now signature Saucony details, including the Maxitrac triangular lug outsole, ‘Butterfly Balance’ design, and a Saucony sock insert for a more ergonomic fit. Featuring a classic running low-top silhouette, the Jazz was declared the “best quality” running trainer of the 1980s and it is a testament to that quality that it remains Saucony’s most coveted model until this day.

In 1983, New Zealander Rod Dixon won the New York marathon and broke history racing as the hunter for no less than 26 miles of the race. Saucony was and remains to be Rod’s brand, and the 1983 DXN sneaker was designed by Rod in collaboration with the Saucony Engineering Team in an attempt to create his perfect running shoe. With the Jazz silhouette as a starting point, the DXN is upgraded with more breathable mesh uppers, a lower heel for a snug fit, and a coloured insert at the midfoot for greater cushioning. 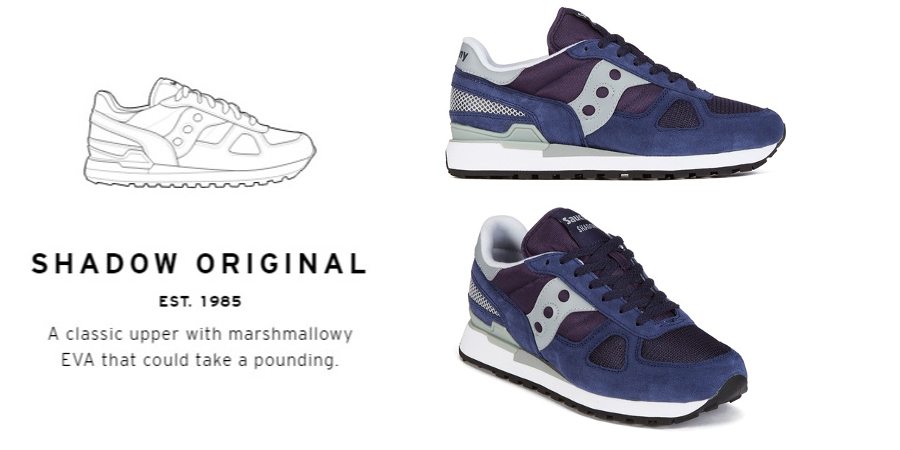 The Saucony Shadow Original is the embodiment of ‘80s style, and was released at the heart of that decade. One again the Shadow Original took the Jazz model as its starting point, bulking the low-top up with a plush “marshmellowy” EVA midsole for exceptional cushioning and a TPU heel piece that delivers greater support. Like the DXN, the upper is constructed with breathable nylon mesh overlaid with suede panelling and, as ever, a Maxitrac triangular lug outsole. The Shadow Original sits alongside the Jazz as Saucony’s pièce de resistance, the two models that would form a dynasty of Saucony sneakers lasting far beyond the ‘80s and ‘90s. 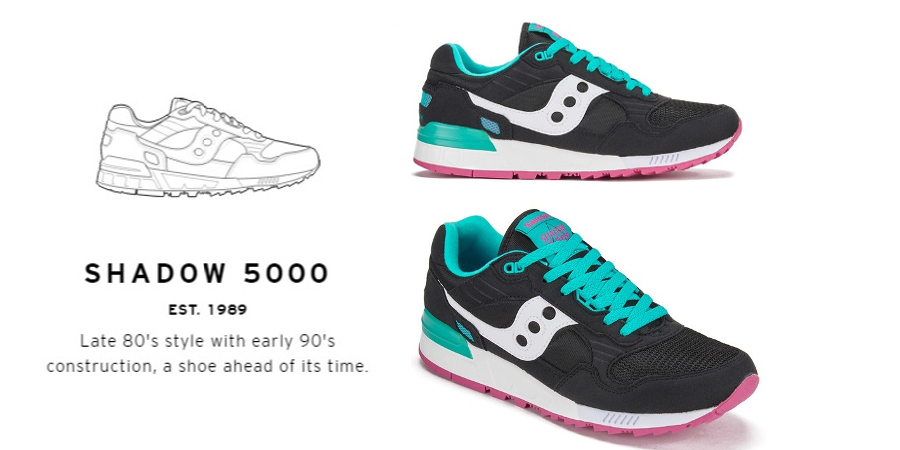 As the Shadow Original and Jazz silhouettes secured their legendary status among runners and fashionistas, Saucony continued to develop the models in a quest for running footwear perfection. Four years following the release of the Original, Saucony dreamt up the Shadow 5000, a model that continued the late ‘80s vibe in style yet was built with a construction way ahead of its time. With the Shadow 5000, the devil is in the detail: the shock-absorbent EVA midsole has been redesigned to support the movement of the foot; additional panelling to the upper offers greater stability; the TPU heel stabiliser is cleaner and more compact. The additional detailing and throwback style of the Shadow 5000 gives Saucony plenty of options in colourways and style, which has clearly been capitalised on in the latest Saucony collection. 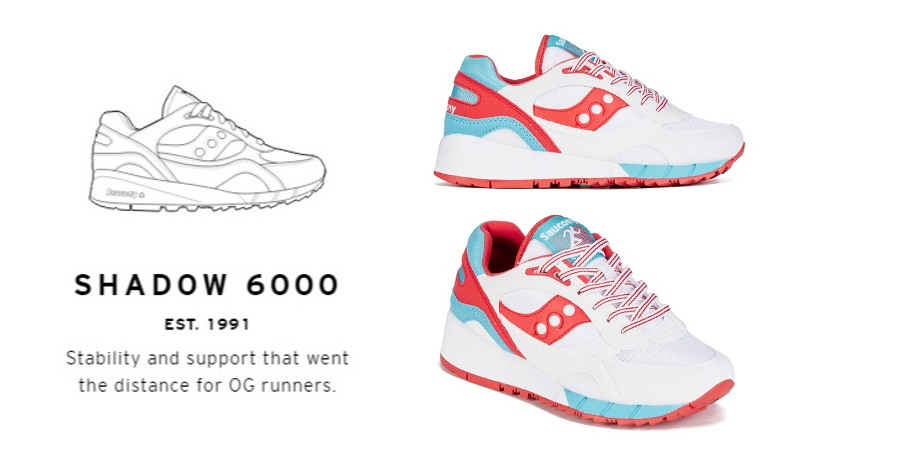 Saucony’s introduction to the nineties was an upgrade of the classic Shadow. A firm favourite among high-mileage Olympic Games runners, the Shadow 6000 did away with the TPU heel support and replaced it with even more EVA cushioning, meaning greater shock absorption and comfort over longer stretches. The silhouette also features a steeper curve through the laces, giving the Shadow 6000 its throwback appeal. 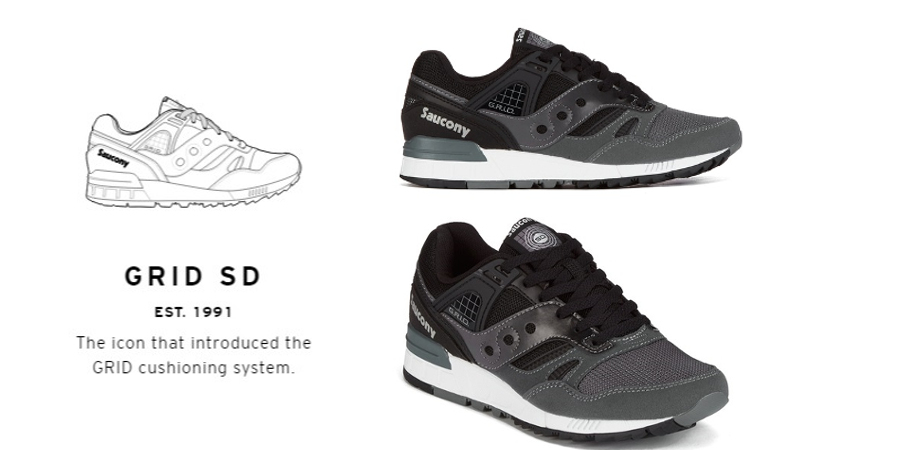 In addition to reinventing popular models, the early ‘90s saw Saucony experimenting with new silhouettes, of which the Grid SD was undoubtedly the most successful. As ever, Saucony sought to combine contemporary styling with industry-leading technological advances in running trainers, and the model itself takes its name from the brand’s exclusive G.R.I.D. cushioning system. The Ground Reaction Inertia Device (GRID) system uses a GRID cassette in the rear midfoot which generates stable cushioning across the heel, thus reducing impact strain to the lower leg, back, ankle, knee and hip joints. The GRID SD silhouette leans closer to the Shadow in shape, and like that model also features a TPU heel section for greater stability. In a nod to the period when it was created, the new Grid SD models pay homage to the time of the video game industry and 16-bit systems with tech-inspired designs and colourways. 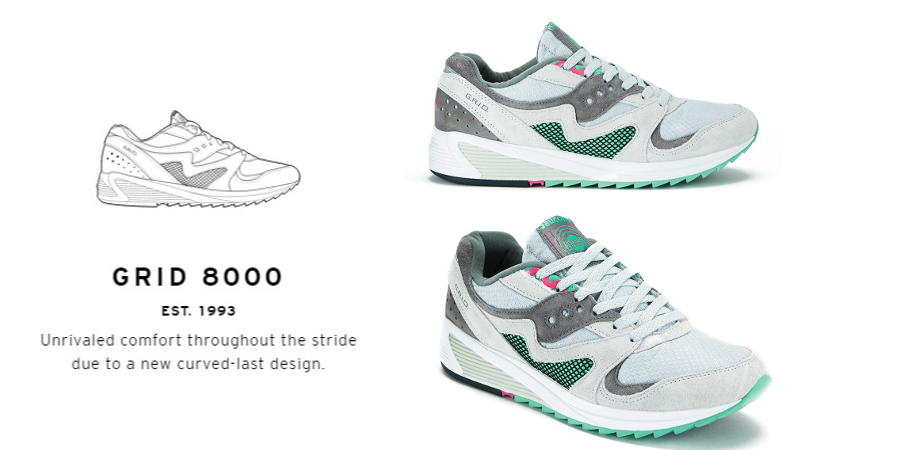 Following the success of the Grid SD trainer, Saucony continued to evolve the G.R.I.D. cushioning system and the Grid 8000 was the first upgraded edition of the shoe. Featuring mesh sections and perforations in the upper for greater ventilation, the beauty of the Grid 8000 lies in the advances in the G.R.I.D. system which now included blended composite Hytrel filaments in an interlocking configuration, offering even greater shock reduction and enhanced stability. Notable details in the design include smaller dots in the signature three-dot Saucony stripe logo and Saucony embroidered branding moved from the side over to the heel. 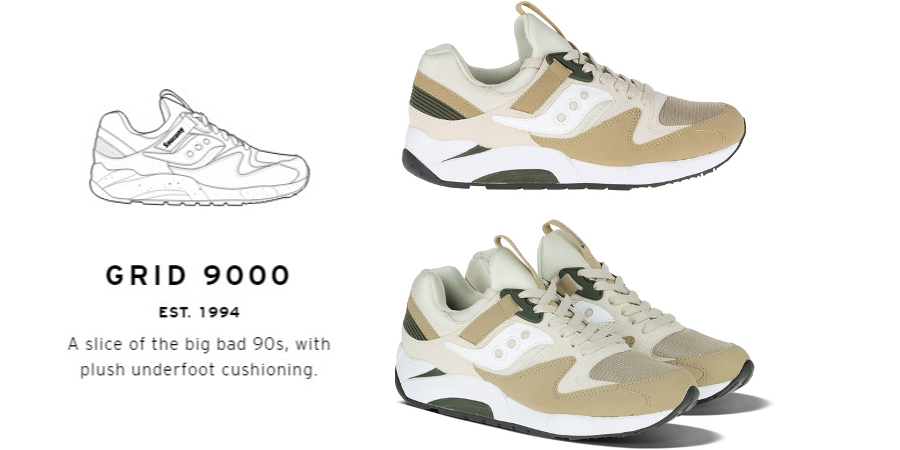 Considered as one of the key reasons behind Saucony’s decision to launch the Originals collection, the Grid 9000 is the quintessential ‘90s premium running sneaker in both design and technology. Mature beyond its years, this new model saw Saucony’s patented and much-respected G.R.I.D. reach its full potential while the silhouette itself is vintage Saucony: retro yet timeless, built for running but perfect for the casual wearer, and complete with all the hallmarks of a Saucony trainer. The Grid 9000 remains as popular today as it was in its 1994 heyday, triumphed by the nostalgic revivalists of ‘90s style.

Get your Saucony look today at AllSole, with free UK and EU delivery available >>

The Best Kids’ Shoes for Summer

Why Shoes Should Be The Most Expensive Part of Your Wardrobe