With the rise in hype beast culture and their integration as a key fashion item for closing the gap between high end and designer brands, the history of trainers has seen a fascinating journey. From their birth as ‘plimsolls’ in the 1870s (named after the Plimsoll line on a ship, due to the similarity that both were waterproof below this line, however if any water entered above the upper section it would get wet), to their integration and development in U.S. basketball and their adoption as a fashion statement at the turn of the 20th Century, the trainer has made its way from a specialised sports shoe to a staple wardrobe item. We’ve curated a list of the 9 most iconic trainers of all time, to show that what goes around really does come around.

Having exploded back on to the high street in 2015 with the rise in interest in vintage sports style, the Stan Smith was created by Adidas back in 1971. Adopting the silhouette originally designed in collaboration with International French Tennis Champion Robert Haillet in 1965, the shoe was renamed the Stan Smith after Haillet retired and American Grand Slam Champion Stan Smith rose to fame. One of the most consistent and influential collaborations of all time and the first ever ‘sneaker’ to feature a completely smooth toe box made of one piece of leather.

Running to Campus Night at @cftoeatoncentre on November 9th because I can't miss these great deals!!! Super excited to see the cool experiences at @hudsonsbay 's beauty department! The event will be running from 5-9pm (also a great chance to get some early Christmas gifts if you're always doing last minute shopping like me) #CFForCampus #sponsored

Born from U.S. college basketball player Chuck Taylor’s association with the Converse sponsored team ‘The All Stars’. Taylor represented the brand so influentially when touring colleges that in 1932 Converse named their classic high top style shoe after him, with “Chucks” going on to become one of the best-selling, most influential and popular basketball, and subsequently fashion, shoes of all time.

Designed by Bruce Kilgore, then ‘The Director of Research and Development’ and now ‘Creative Footwear Innovation Director’ at Nike, the Air Force was the first shoe to utilise the Nike Air Technology. Originally designed for performance purpose, the style was worn by NBA Player Jerry Steakhouse amongst others on court in the early 80’s, however it was more popularly adopted on the streets of Harlem, New York coining their nickname “Uptowns”. Rappers Nelly, St. Lunatics, Kanye West, Nas, Rakim, KRS-One and Jay Z are amongst a few known for creating iconic music and style surrounding the AF-1, not to mention the modern adaptation of the shoe by the likes of Virgil Abloh for Off-White, and influencers @avanope, @miniswoosh & @frecustoms who have used their innovative creations to boost the shoe back to high-end status in modern fashion.

@freluxe Genuine Goyard AF-1 Customs releasing this Friday 18th, Limited to 15 pairs. Price is only £200, will never release with this price again. (Genuine Goyard material is from a bag we cut) 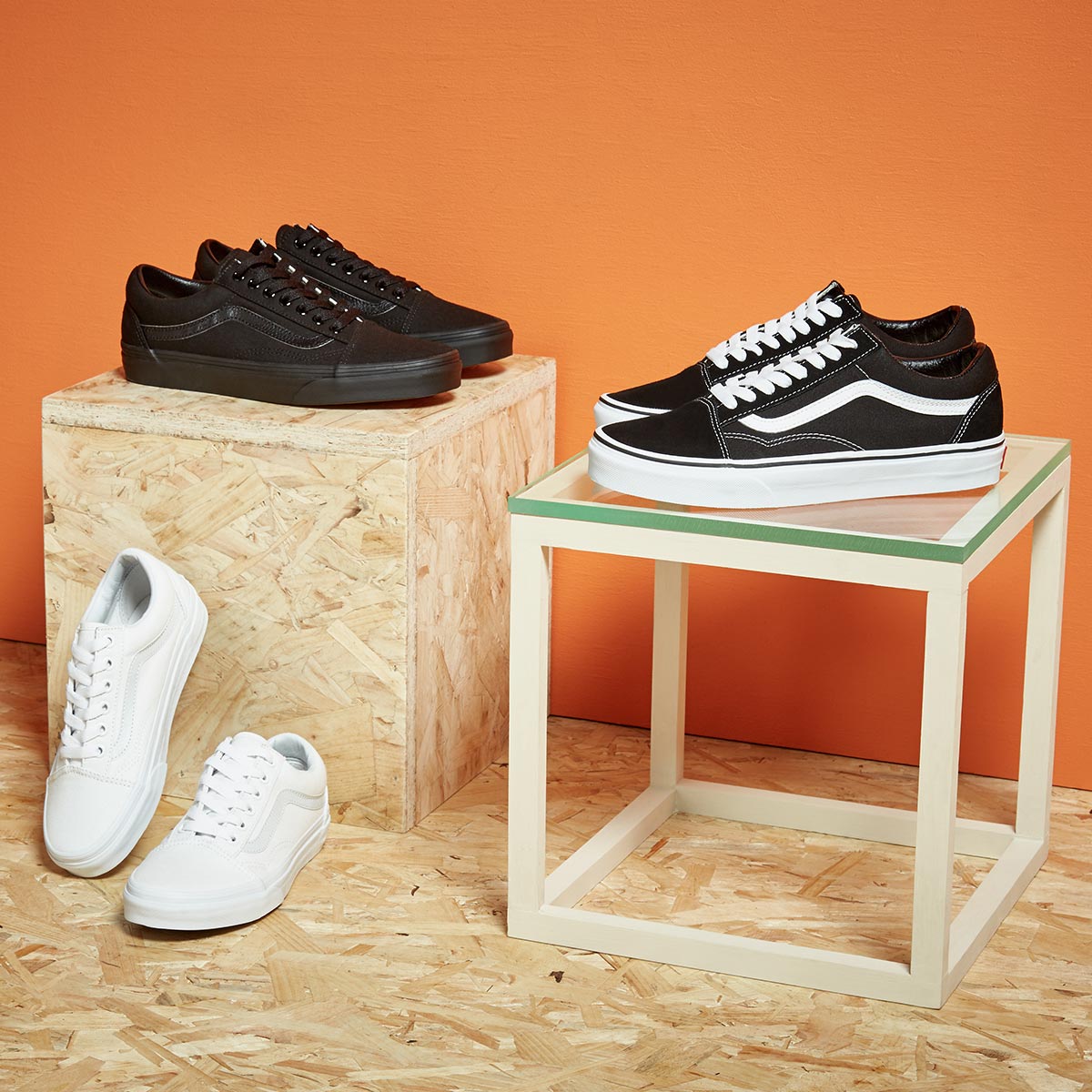 The first skate shoe to incorporate leather panels, with the Vans brand having originally been founded as the ‘Van Doren Rubber Company’ in 1966, stumbling across this silhouette meant they had an iconic creation on their hands. Making its debut in 1977, the Old Skool was originally called “Style-36” and showcased the iconic Vans “Sidestripe”. What began as a doodle humorously referred to as the “jazz stripe” has now become the unmistakable hallmark of the Vans brand. In the 80’s the brand went on to become one of the first to innovate in customer interaction through their product, using the panelled design as an opportunity for each person to customise their pair meant the shoe was visible in such a broad variety of colourways it became one of the most recognisable on the market. Its integration in to music fuelled the Old Skool’s relaunch in to fashion fame in recent years, with Rappers such as Wiz Khalifa, A$AP Rocky and Kanye West famously wearing the shoes as a fashion staple alongside high end designer labels, Vans have now become one of the most iconic shoes in recent years for closing the gap between high street and designer fashion.

Originally designed by Olympic track coach Bill Bowerman, the Cortez was marketed as the first modern track shoe (famously recognised as technically being an updated Onitsuka Tiger with a Nike marketing twist), released in time for the 1972 Munich Olympics. Gaining legendary status as one of the earliest long-distance running shoes the style was cemented in the 1994 hit film Forrest Gump when he is gifted a pair of Cortez to help him run across America. In recent months the Cortez has become a massive vintage feature for Nike, with Bella Hadid fronting a campaign reiterating the iconic style ability of the shoe.

PARIS!! My @Nike Cortez launch tomorrow at the Nike Store Forum Des Halles! See you there ??????

Founding member of The Skate Kitchen, Rachelle Vinberg (@rachellevinberg), hopes that her visibility within the skate community inspires girls to join the scene. A strong believer in living in the moment, being open and unguarded, and letting whatever happens, happen. A classic, the #SUPERSTAR in stores now.

Originally designed in 1965 integrated the use of the “shelltoe” as an easy solution to a common problem where toeboxes became crushed when dragged during contact when playing basketball. Once called the “Pro Model” the Superstar began as a “Chuck Taylor on steroids” as the first full leather basketball shoe, which later became noted as an iconic stylistic element. The shoe was propelled in to fashion relevance through its association with Run DMC, who adopted it as a key feature of their on and off stage uniform in 1983 before the first enormous trainer deal of its kind came through the signing of a million dollar contract paving the way for future signature collaborations from the brand with the likes of Kanye West and Pharrell Williams.

Arvida Byström (@arvidabystrom) is an artist, photographer, model and cyber sensation. Known for her photography, which questions femininity and gender standards using so-called “girly” aesthetics. The #SUPERSTAR Bold Women's is in stores now.

1984 saw Nike sign a five-year contract with Chicago Bulls star Michael Jordan, including collaborative promotion of a brand new red and black basketball high-top. Although at first the shoe was banned from being used as a professional performance shoe as it was not majority white in colour, this only fuelled the Jordan’s success as a rebellious fashion statement which propelled to the forefront of “sneaker culture” among the basketball obsessed U.S. youth. With constant redevelopment and innovation in design, Jordan’s have now become one of the most collectable trainers on the market.

what's on your feet today? Dont forget to use #najshouts to possibly be featured! ?? 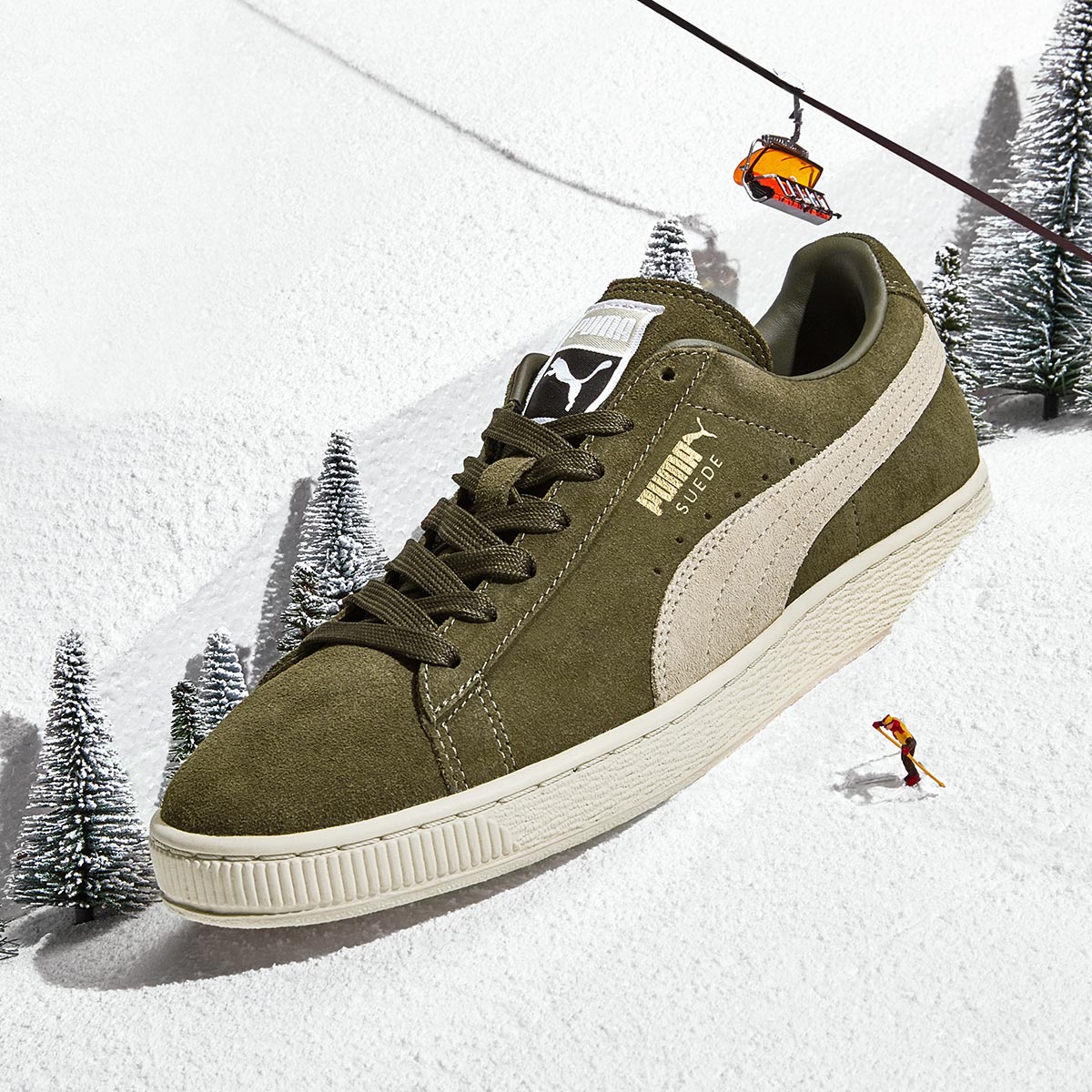 Designed for Knicks Basketball player Walt “Clyde” Frazier in 1973, who alongside his rise in fame requested a custom pair of Puma Suede’s and is responsible for making this a shoe a household name due its myriad of bold colourways. Still popular today the style has recently inspired hybrids such as the Puma basket and Rihanna’s infamous Creeper collab, Puma has dropped the “Clyde” name with recognition that this is the ultimate suede trainer to have and that alone gives it a name.

A post shared by Onitsuka Tiger México (@onitsukatigermexico) on Nov 7, 2017 at 6:28pm PST

Originally founded in the 1950’s by Japanese Military General Kihachiro Onitsuka after WWII, Tiger’s were created in an effort to boost youth morale through athletics. Having worked with marathon runners in the 50’s to produce the most professional athletic shoes on the market. Two years prior to the 1968 Olympics the brand introduced the infamous ASICS stripe logo on to the leather upper, which went on to become the well renowned Mexico ’66.

One from the weekend: Clashing those green hues to create the perfect everyday autumnal look ??? @onitsukatigerhq trainers available at @officeshoes #mexico66 #ad ?