Birthed on the basketball courts of Malden, Massachusetts, Converse is well and truly entrenched in American sporting history. The first brand to produce shoes specifically for the new basketball sport, early canvas hi-tops soon became the go-to court shoe worn by professional ballers and amateur dribblers wherever the game was played. 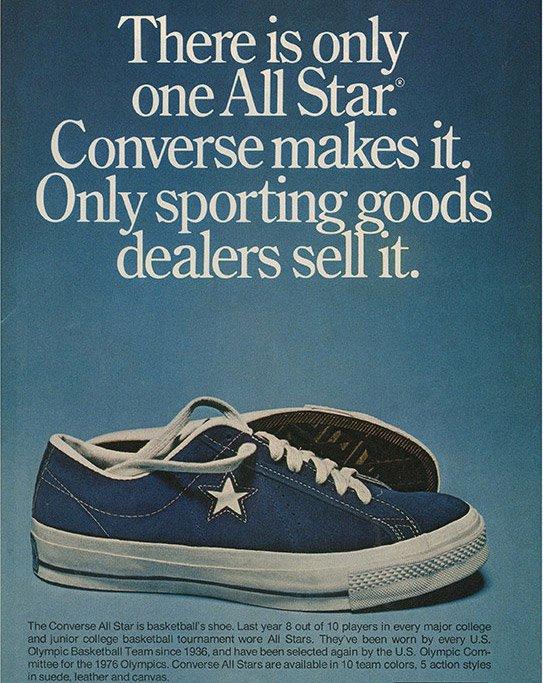 The following years saw the game of basketball grow and grow, from an amateur game to a professional league loved by the nation. As the sport evolved, many players were seen cutting the tops off their Converse hi-tops, liking the freedom of movement that the lower shoe offered.

By the late 60s, technological advances in sporting apparel meant that PUMA, adidas and even more names were offering high-tech, premium options for the court. Leather and suede joined the humble canvas shoe, and not to be outdone, Converse developed their All Star Leather. Using a cut-out star design, the new style showed off the technologically constructed shoe.

Converse’s Suede Leather All Star released in 1974 is the closest we come to the One Star that we know today. Perfected over decades of testing, the vulcanised leather sole appeared as a top of the range ball shoe, a trainer at the top of its game. Sadly, the Leather All Star’s days were numbered and with strong developments in sole technology, just two years after the shoe’s introduction, the Pro Leather had overtaken its one star counterpart.

As the memory of the original One Star grew fainter and fainter in the West, Americana tribes in the Japan saw the shoe as a staple in the U. S’s fashion history and would buy up the rare style wherever they could find it. Soon becoming a collector’s item, the refined silhouettes were a staple for a group of young people mimicking the minute details of late-60s American college style.

In 1993 the Converse One Star made a comeback. Digging back through the archives, the brand re-discovered the shoe that would become a symbol of a social revolution. Hitting mainstream advertising and appearing on skate icons, the shoe became a firm favourite on the 90s-grunge scene. This new, anti-fashion styling, characterised by ripped jeans and plaid shirts, needed a simple sneaker and the newly released Converse One Stars, renamed after the single bold star on its flank, fit the aesthetic. Worn by the personification of the wave, Kurt Cobain himself, the One Star had now cemented itself as an alternative fashion icon.

Back again for the fourth year now, the One Star wave shows no sign of slowing down. With a suede upper and the classic vulcanised rubber sole, the shoe has a distinctly 70s feel. The sneaker that started on the courts and travelled all the way to the skate scene by way of Japanese counter-culture has yet again reinstated itself in pop culture with ambassadors like Millie Bobby Brown, Tyler the Creator and Leo Mandella.

Discover the collection on AllSole.

A fan of maximalist fashion and all things fluffy, you can find me layering prints or looking for new earrings. A disco queen at heart, if I'm not dancing around the house to 70s soul, I'm counting my flares.

Converse: Made By You